Teams Conversations, Chat or Email? Deciding which one is best

05 Jun Teams Conversations, Chat or Email? Deciding which one is best

Prior to the introduction of Microsoft Teams, choosing a mode of communication within a team was relatively easy. Beyond phone calls and face-to-face meetings, email was basically it. We used email to share and discuss documents and information and to communicate with multiple people at once. Email was eventually complemented by instant messaging services like MSN Messenger (remember that?) or, later, third party services like Slack, though email continued to dominate.

The introduction and widespread adoption of Microsoft Teams in recent years has given us more communication options, including ‘chat’, ‘conversations’ and video meetings. On the surface, this might appear to be a good thing, however I think it has created some confusion within teams and organisations around which communication method should be used when. In fact, many teams are not as productive as they could be as a result.

In a previous blog post, I have already suggested that we should be trying to move internal conversations in our team organisation, out of email in Outlook and into channel conversations within Microsoft Teams. I won’t go back over that here except to highlight the inefficiencies created when you try to track important conversations in MS Outlook. We all know how unwieldy they can get very quickly. You can read that article here.

My purpose in writing this article is two-fold: I want to add the Chat function in Teams to the mix and consider when you might use that in preference to channel conversations or email. And I want to point out the benefits of agreeing, as a team, which communication tool you will use in which situations. Is it Teams Chat, Conversations or Email: Which one should we be using in our team communication? Most teams never get around to doing this, or if they do it is more accidental than planned, and there may be a better way.

Let’s recap the ways you can communicate with Microsoft Teams. There are three main tools:

1. Meetings via video (Teams Meeting)
2. Chat (one-to-one or in a group)
3. Conversations (within a Channel)

Each have their own pros and cons. To keep it simple, I’ll leave Teams Meetings out of this discussion and focus here on the distinction between chat and conversations in channels.

The chat feature (under the ‘Chat’ icon on the left-hand side of the Microsoft Teams desktop application) is very similar to what we’ve all become used to with the instant messaging apps on our phones – apps like Google Messages, Facebook Messenger, WhatsApp or Apple Messages.

Just as you can in those apps, you can use chat to send a quick message to someone in your organisation, or to a group of people (Group Chat). Messages are private between you and the people you’re chatting to, whether that is just one person or a group. No one else can see these interactions.

I like to see chat as being a lot like what happens when you bump into someone in the office and have a quick chat about something. ‘Water cooler’ conversations, you might say. The difference is that, as on your phone, all your chat with a particular person or group is preserved in the ‘thread’, so you can go back and revisit old chat messages if you need to. You might also set up a “group Chat” to organise a small event or some training. Or you may need to create a Group Chat for an online discussion with several people in different Teams within Teams.

One unique thing you can do in chat is mark a message as important, or even urgent. (See the screenshot below.) Obviously, it’s a good idea to use the ‘Urgent’ status sparingly. If something is really urgent, you’re probably best picking up the phone or wandering down the corridor to speak to your colleague face-to-face.

One significant limitation of chat over a conversation within a channel is that chat doesn’t provide access to SharePoint files or storage space in the same way that conversations do. I’ll explain this in more detail below.

Conversations in a Channel

A conversation in Teams takes place within a channel in a team (under the ‘Teams’ icon on the left-hand side of the Microsoft Teams desktop application). Within a team, every member can see all the channel conversations going on, even if they aren’t actively a part of a particular conversation. (This can be a good way for the boss to keep in touch with what’s going on without having to be copied into a million emails.)

Within a team, there is the automatically created ‘General’ channel and you can create further, separate channels related to specific projects. This is already cleaner than email, where discussion of various projects can so easily get mixed up, but it gets even better because within each channel you can create endless separate conversations around a specific project. (See screenshot below.) 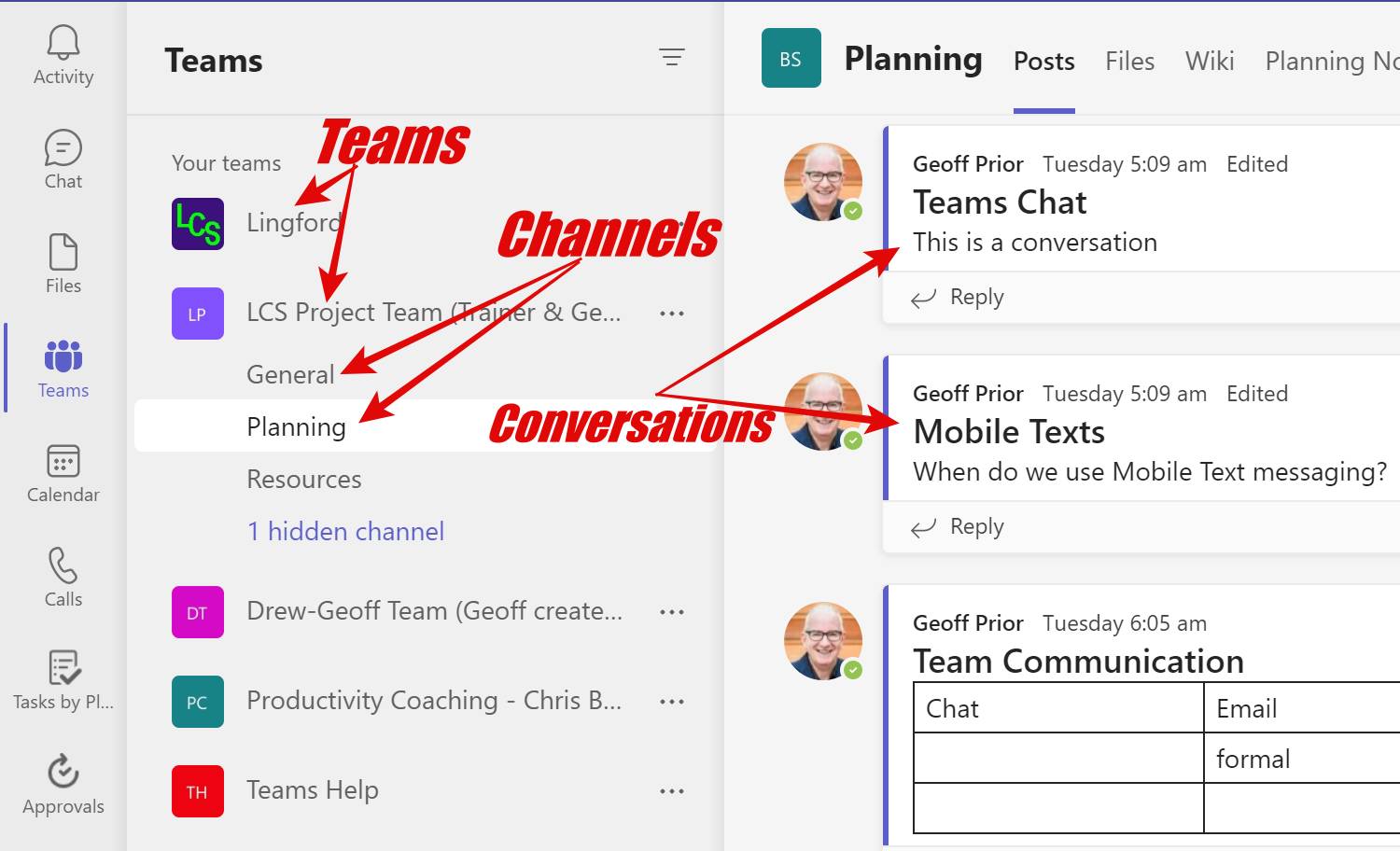 A conversation inside a channel can be tighter, more interactive and more effective than just creating an email thread. And it is far easier to track the progress of a conversation as a result as you will see below, which is why I think moving internal team communication away from email and into channel conversations is such a good idea.

You should start a “conversation” in a Channel by including a subject line, much in the same way you would do in an email. This gets the conversation off to a good start and makes it far easier to identify the various subject threads, without having to scan them to find out what the conversation is all about. (See below) 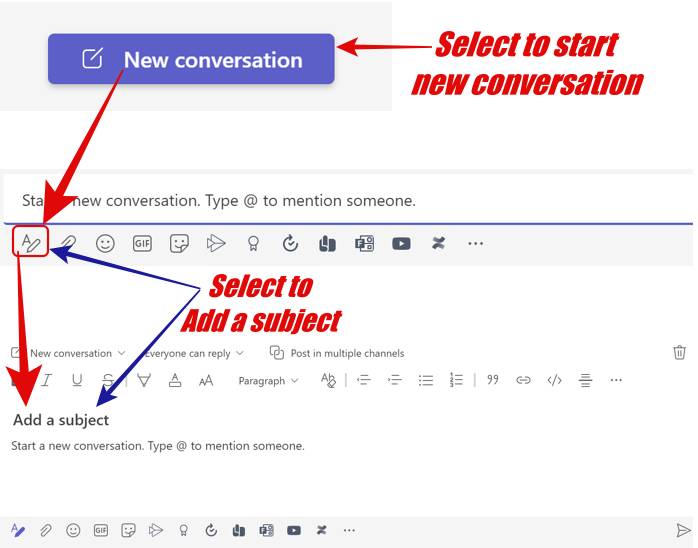 Note, you now have some options appear at above the formatting ribbon such as “New conversation” or “Announcement” and others. We won’t go into those here, but they are definitely worth looking at.

Just one word of warning: for conversations to work as intended, everyone needs to follow the ‘rules’ of channel conversations. That is, making sure relevant replies are made within the right conversation and starting a new conversation for a new topic. However, if everyone does do this, the conversation is far easier to track. Plus you also solve the problem of emails that try to cover too much ground.

Remember though, that your conversations within a channel are not private. Anyone in the ‘team’ can see them, and can join in. That is the point though: you want everyone who needs to know what is happening (i.e. the team) to be able to keep in touch without them having to be copied in on every email. With smart use of notifications, you can keep in touch with a project without being constantly interrupted by emails that you don’t need to respond to. (I’ll cover the topic of notifications in a future article.)

(If privacy is what you want for a specific conversation, then it’s best to use Teams Chat for that, either one-to-one or with a small group – as described above.)

The other big advantage that a channel conversation has over email (and Chat) is you can use the ‘shared workspace’ to keep relevant documents together and accessible by every member of the team. Each team has its own online SharePoint site on which you can share and collaborate on documents, etc. This very effectively overcomes the email problem of attachments that get lost in the conversation or where multiple versions or copies are created.

However, in light of what we’ve covered in this article, I’d like to suggest a number of things for the consideration of you and your team.

Firstly, avoid using email for ‘internal’ conversations, that is, communication within your department or team. Try to get everyone thinking ‘Teams’ first. Before you send an email, check whether there is already a Team or channel set up in Teams that includes all the relevant people and relates to the project you need to discuss. If not, consider creating a new team or channel. Or perhaps start a conversation in the General channel. The more everyone gets used to using Teams conversations by default, the more everyone will get used to it. And everyone can enjoy a much slimmer email inbox!

Secondly, use Chat (one-to-one or with select groups) within the team for those ‘off to the side’ chats you have between a select group of people. Remember, unlike a conversation within a channel, only those involved in a specific chat can see those messages.

Finally, to reiterate what I suggested earlier, sit down with your team to agree on when to use Teams Chat, Conversations or Email. This conversation may include when to phone or text or even when a face-to-face meeting is required.

The main idea is to try and get some consistency which will help streamline the communication within your team which will improve the overall productivity of your team. This should not take too long and may even require some tweaking over time, but the investment will pay off many times over.

I hope this article has been helpful and gets you thinking about ways to be more consistent with your teams internal conversations.